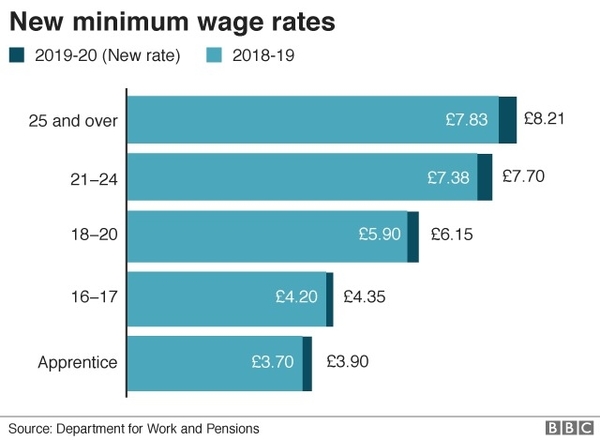 Minimum Wage Rates Rise, But Bills Go Up Too

Two million UK workers on minimum wages are now receiving a pay rise - but a string of household bills have also increased.
Workers aged 25 and over on the National Living Wage will receive £8.21 an hour from Monday, up from £7.83 - a 4.9% rise.
Pay rises also take effect for younger workers on minimum wages.
However, the pay rise comes as bills ranging from council tax to the TV licence fee become more expensive.
Women represent an estimated 60% of those who are benefitting from the rise in minimum wage rates. Workers in the hospitality and retail sectors are the most likely to be on the lowest pay, and nearly 200,000 of them will receive the pay rise.
New rates
The charity the Living Wage Foundation says the wage level needed to "meet the costs of living" is £9 an hour across the UK and £10.55 an hour in London
"We are pleased that million of workers across the country will see an above-inflation pay rise," said Bryan Sanderson, who chairs the Low Pay Commission, which recommends the appropriate level of pay.
He pointed out that 20 years since the introduction of the minimum wage, there had been no significant effect on jobs, despite the extra cost to businesses.
How high can the minimum wage go?
In that time, the minimum wage has risen much faster than average pay.
Workers in general have seen wage growth beat inflation in recent months, after a period when price rises were greater than pay rises.
Wages v inflation graph
However, all households are seeing increases in a variety of regular bills.
They include:
Council tax or its equivalent, set by local authorities, which is going up by more than inflation for millions of people
Gas or electricity prices for more than half of British households who are on variable or default tariffs, typically going up by £117 a year, now the cap on the cost has been raised
The TV licence fee, which has gone up from £150.50 to £154.50 a year
The standard NHS prescription charge in England, which has risen from £8.90 to £9, although Scotland, Wales, and Northern Ireland have abolished these fees.
Other changes include a small rise in water bills, various increases on vehicle tax rates, and a rise in some companies' phone and broadband prices.
However, price caps are now in effect for household rent-to-own items, limiting the interest that customers pay to no more than the product's cost, and phone calls to directory enquiries.
Call for more pay
Minimum wages in the UK are among the highest compared to typical pay in advanced economies of the world.
The government said that it was "determined" for low pay to end.
Minimum wage rates around the world
However, the TUC has argued that minimum wage levels remain too low. It wants all workers aged between 21 and 24 to receive the same as those aged 25 and over, and for them all to receive £10 a hour.
"Young workers are still getting a raw deal on pay. Their bills are not any cheaper, but they have to make ends meet with less. That is just not fair," said TUC general secretary Frances O'Grady.
How long would it take you to earn a star player's salary?
Automation could replace 1.5 million jobs, says ONS
Firms drag their feet on gender pay gap reporting
There has been a long-running campaign encouraging businesses to pay their workers a higher amount.
Katherine Chapman, director of the Living Wage Foundation, said: "Over 5,000 responsible employers have gone beyond the government minimum and committed to pay a real living wage. We now need to see more businesses step up and provide a wage that truly covers the cost of living."
National Living Wage v real living wage
The National Living Wage is the legally binding hourly rate for workers aged 25 and over
The real living wage was devised by charity the Living Wage Foundation. It argues the government's National Living Wage is not high enough to meet workers' needs and encourages employers to adopt its more generous, independently-calculated rate